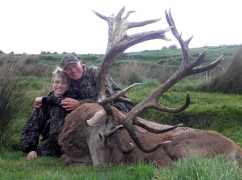 Several years ago I contacted Amplehunting inquiring about a father/Son hunt. My plans were for my sons 8th grade graduation in may of 2012. After receiving an email from BJ Holdsworth, I knew I needed to call and find out more about the Father Son hunt.

We talked about Austin's hunting experience and were told that he had oppurtunities for Austin to practise with one of BJ's loner rifles first up on targets then goats and other animals, well before Austin would take a shot at his Red Stag.

Before booking BJ provided several referrals that were from the US. All the hunters I called spoke highly of BJ and he provided a great hunt with numerous oppurtunities to take a great Red Stag, after this I set a date to make the trip to hunt New Zealand.

After counting the days until our trip, we landed at Auckland international airport then rented a car and drove to the lodge, when I pulled into the driveway that evening I felt as though I was meeting an old friend.
Austin and I had the best five days hunting for Goats, Turkey's, Ducks, Possums, Fallow and Red Stags. I think the total was 27 animals. Austin shot 20, he reminds me all the time.

BJ and Tim filmed the hunt which made the trip even better. having pictures and video make the trip last even longer.
Please if you ever want to have the smile on your face like I did the entire trip with Amplehunting contact BJ and book the trip of a LIFETIME.